When Ayesha Bullock finished her associate degree from Perimeter College, she thought about 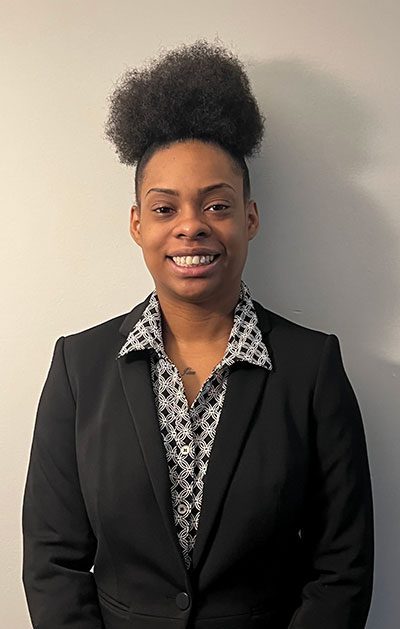 taking a break from school. She works for UPS part-time as a frontline supervisor and could have used a breather. But, immediately proceeding with a B.B.A. would get her closer to her goal of transitioning to a corporate position at UPS. She enrolled in Robinson’s online B.B.A. degree completion program as a finance major and just graduated.

“Going to campus in person right after work would have made my days extremely long,” Bullock said. “A flexible online schedule allowed me to break my classes into manageable loads.”

Though her courses were virtual, Bullock constantly interfaced with peers on group projects. In Global Business with Mourad Dakhli, she and two classmates collaborated with three students from the University of Pretoria in Pretoria, South Africa, on a five-page paper about an innovation of their choice. Bullock’s team focused on the pros and cons of implementing artificial intelligence (A.I.) in South Africa. They explored how A.I. could advance the South African economy, weighing that enormous benefit against potential issues including regulation of its use, cultural and religious beliefs surrounding A.I., and the effect of automation on job availability.

“The game didn’t center on one single aspect like production or distribution,” Bullock said. “I learned about running a business overall.”

Through all the group work, Bullock built a sense of community with her peers. When she struggled to remember Excel formulas, one classmate emailed her a spreadsheet of formulas for ease of reference. He also taught her how to extract a chart from Excel and paste it into another document.

Robinson’s online B.B.A. program is convenient but by no means easy. While at Perimeter College, Bullock sought counseling so she could better manage the stress of juggling her job and school. Leaving work at 2:00 a.m. and studying until her next morning class on zero sleep wasn’t feasible. Bullock’s counselor encouraged her to rearrange her schedule so she could get enough rest.

“I started using my midday break to take a nap,” Bullock said. “Then when I got off work, I’d knock out one assignment and go to bed. I stopped overloading myself.”

Bullock pushed herself to the limit to earn her B.B.A. Walking in Georgia State’s in-person graduation ceremony felt really good.

“The past four years have been long and hard. I told myself I couldn’t quit because I was tired or angry. I had to finish so I could finally breathe,” she said. “When I graduated, I exhaled and said, ‘I did it!’”

Learn more about the Online BBA in Finance here